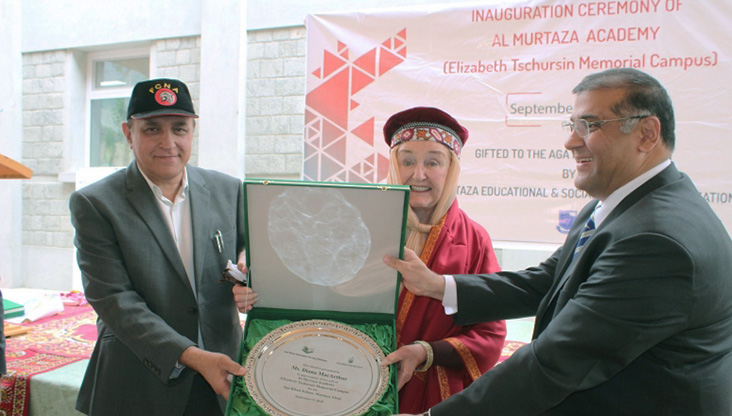 9 September, 2018 – Murtazabad, Hunza, Gilgit-Baltistan
The Aga Khan School Murtazabad, today joined the Aga Khan Education Service’s network’s 107 schools in Gilgit Baltistan, further expanding its vision to provide much needed quality education to students in the region.
Previously known as the Al-Murtaza Academy, the school was gifted to the AKES by the Al-Murtaza Educational and Social Welfare Organisation (AMWESO). The school - which from its humble beginnings, was converted into a state-of-the-art campus with 13 classrooms, a library, science and ICT laboratories - was built by Mrs Diana MacArthur, in memory of her late daughter Elisabeth “Leeza” Tschursin, who having completed her university degree in the United States, travelled to Hunza and taught science at the school.
Speaking at the ceremony to transfer the school, Imtiaz Momin, CEO AKES, Pakistan expressed his sincere gratitude to AMWESO for entrusting the school to AKES and for recognising the benefits and contribution made by the Aga Khan education model. He spoke about the Aga Khan’s vision for education and its transformative role in the lives of individuals and communities. “We are honoured to accept this gift on behalf of the Aga Khan Education Service. Not only does this enable us to increase access to education in the region, but it is also a realisation of a vision that is closely aligned with that of His Highness the Aga Khan, who, along with Sir Sultan Mohamed Shah the Aga Khan III, has been instrumental in laying the foundation for education, particularly for women, in Gilgit-Baltistan.” He added, “Together we will ensure that every student in the school receives the highest quality of education in facilities we can all be proud of.”

Mrs MacArthur also addressed the gathering and said that “AMESWO has achieved its goals: the students are inspired to learn and thrilled to know that this beautiful, safe building and grounds were meant for them.” On the decision to gift the school to the Aga Khan Education Service, Pakistan, Mrs MacArthur said that this will ensure the quality of education and the sustainability of the school. Her daughter, Mrs MacArthur said, “admired the good work of the Aga Khan organisations, so I feel certain that she could not have hoped for a better outcome.” Mrs MacArthur also expressed satisfaction with the school’s affiliation with the Aga Khan University Examination Board.
The ceremony, which was held on the grounds of the school, was attended by numerous dignitaries including Dr. Muhammad Iqbal, Minister for Public Works in Gilgit-Baltistan, Mr. Naem Uddin, President of the Al-Murtaza Educational and Social Welfare Organisation, President of the Ismaili National Council of Pakistan, Mr. Hafiz Sherali, officials from the Aga Khan Education Services and other agencies of the Aga Khan Development Network, as well as leaders from the Ismaili Community.
The chief guest, Mr. Iqbal, welcomed the addition of a world-class school in the region and expressed hope that the institution would serve the students of the surrounding communities for decades to come. He lauded the hard work and determination of Mrs MacArthur and the Al-Murtaza Educational and Social Welfare Organisation and said that he looks forward to these efforts bearing fruits in the shape of confident, well-educated students. Mr. Iqbal also announced naming one of the link roads from the Karakoram Highway to the school after Elizabeth Tschursin and said that he will recommend naming a road in Gilgit city after Mrs MacArthur in recognition of her services to the cause of education in the region.
Mr. Naem Uddin thanked Mrs MacArthur for her continued support through the years and noted that the celebration marked the successful partnership of the Al-Murtaza Educational and Social Welfare Organisation and the Aga Khan Foundation and the Aga Khan Education Service, Pakistan to offer the children of central Hunza the best education available in Pakistan. “We have entrusted AKES,P with the future of our youth to educate in the highest traditions of the Aga Khan Development Network,” he said.
The Al Murtaza Academy was initially a small private school established by the Al Murtaza Education and Social Welfare Organisation in 1993. It was later upgraded to a middle school. With Mrs MacArthur’s support, the Al Murtaza Education and Social Welfare Organisation acquired land in Murtazabad. Construction started in 2013 and was recently completed. The school caters to students from pre-primary to grade 10 and has a current capacity of over 400 students.
On behalf of the Ismaili National Council of Pakistan, President Hafiz Sherali thanked Mrs MacArthur and all the donors and organisations who have been a part of making the school a reality. He expressed hope that the school will play a vital role in improving the availability of quality affordable education for the children of Hunza.
The ceremony was interspersed with performances by the students of the new Aga Khan School, Murtaza Abad. Tokens of appreciation were presented to Mrs MacArthur and other distinguished guests by the Aga Khan Education Service.
Aga Khan Education Service, Pakistan is amongst the largest private networks of education institutions in the country. Reaching out to some of the most remote areas of Pakistan, AKES,P has been providing quality education for over a hundred years. It operates 160 schools in Pakistan with a total enrolment of approximately 40,000 students. Of these schools, 95% are in the districts of Gilgit-Baltistan and Chitral.
Related news:
Daily Times
AKDN
Pamir Times