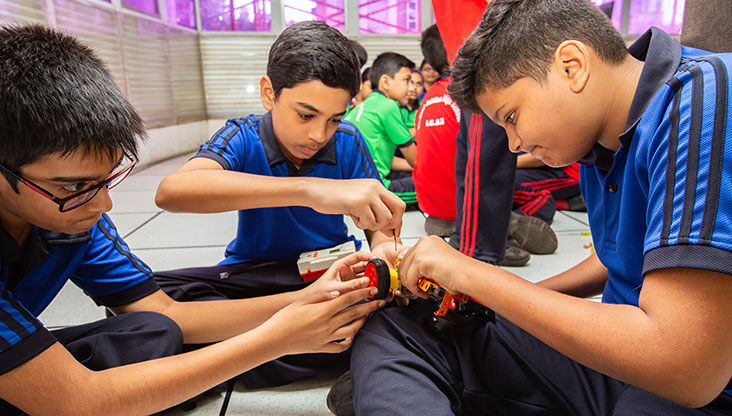 The Olympiad, organized by Srireina Technologies, aims to encourage participants to problem-solve creatively through hands-on design, construction, and iteration. The course consists of various levels that starts with Simple Electronic Circuits and continuously covers concepts all the way until Humanoids at Level 7.
Since 2016, the Aga Khan PJHS, Warangal has been offering courses such as Robotics, Abacus, and Vedic Mathematics. The impact of these courses has shown that working with new technologies contributes to a students interdisciplinary understanding of Science, Technology, Engineering, and Math (STEM).
Redde attributes his grand success to the ground-breaking robotics programme at his Aga Khan School in Warangal. “When the school introduced robotics, I knew only the basics. But as the programme progressed, my interest in robotics grew. This inspired me to compete against students from 50 schools across the states of Telangana & Andhra Pradesh,” said Redde.
The robotics class gave Redde a platform to kickstart his dreams. With his teachers’ unconditional support, Redde was able to design the Doorbell robotics model which inevitably won him the competition.
Proud of his achievements, his robotics teachers, Mr. Naresh, and Mr. Pradeep expressed: “He has an incredible instinct towards creating robotic models, many models created by him are sometimes even better than the ones in the textbooks. He is inquisitive and always looking to create new ideas.”
Kiriti is an inspiration to his peers at Aga Khan PJHS, Warangal. He says his dream is to become a doctor who would perform surgeries and other related tests using robotics. To his peers, he says, “Explore, apply your thoughts to experiments and do not be afraid of your failures.”
Congratulations Kiriti!