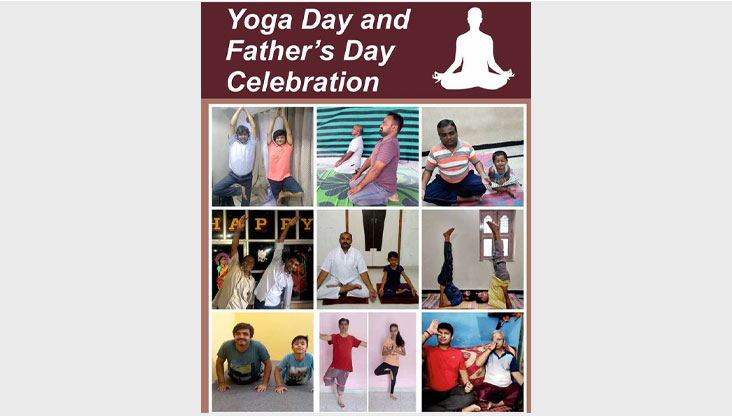 More than ever the teachers, parents and students of Aga Khan Education Service, India (AKES,I) are revelling in feelings of wellbeing and positivity. Why? The answer lies in a simple but creative combination of dads, kids and yoga; and all as a result of the pandemic lockdown. 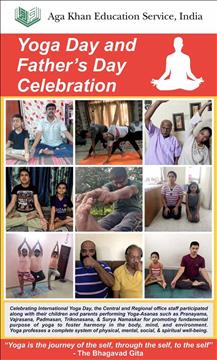 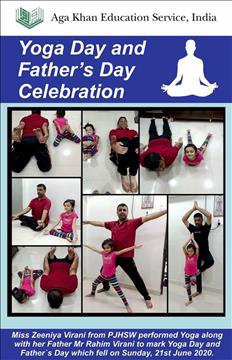 This year International Yoga Day also coincided with the Father’s Day, so the parents, students, and staff of AKESI celebrated both events by promoting the purpose of yoga through fathers practising these ancient arts with their children.

The eighteen Physical Education teachers across the eight schools of AKESI became the ‘Yoga Heroes’.  Their job was to emphasise the importance of regular training in yoga-asanas and to hook at-home-fathers into their remote and on-line PE classes so that dads and kids practised their poses together.  The programme allowed the parents to take a break from their routine of work-from-home and work-for-home by engaging with their children and enriching the bond between them.

The father-child duo were guided online by AKES,I’s PE teachers about the forms and process to be followed for performing yoga poses and enjoyed engaging their body muscles, working on limbs, stretching shoulders, twisting torsos and learning to breathe the right way.  They were also educated about the significance and transformational benefits of yoga in daily life.  While in the beginning some juggled maintaining postures and attempting to breathe, they later admitted feeling light, relaxed and cherished the sense of relief that yoga gave them.

Mr. Rahim Vasaya a parent of class 4 student from Diamond Jubilee High School, Hyderabad voiced the views of many when he said, “It was the best Father’s Day ever, as I got engaged into yoga activity along with my child.  I thank AKES,I and school teachers for this phenomenal idea of bonding families together during this difficult time.”

Yoga is an ancient form of fitness regime which originates in India and focuses on developing balance, strength and flexibility of body and mind.  There are eighty-four yoga-asanas prescribed in the ancient Indian scripts, from basic to advanced.  Out of these eighty-four yoga-asanas, the participants performed more than 30; to name some Pranayama, Vajrasana, Padmasan, Trikonasana, Bandha Sarvangasana, Sukhasana, Vrksasana, Bhujangasana, Dhanurasana, Virabhadrasana, Janu Sirsasana, and Surya Namaskar.

A secondary section PE teacher Mr. Gajendra Patil from Diamond Jubilee High School, Mumbai summed up the initiative, “Every year we celebrate Yoga Day in school, but this year was special with a week-long activity promoting the benefits and fundamentals of yoga in our daily lives.  We conducted well-guided online Yoga classes with lower to higher grade students and their fathers.  The yoga week was well received by the parents and school received positive feedback.  In all, it was a great success”

Yoga professes to be a complete system of physical, mental, social, and spiritual well-being.  Today, the practise of yoga is spread all over the world as a way of improving body posture, balance and stability; fostering mental calmness; building endurance; relieving stress and depression; improving sleep; increasing concentration; for spiritual awareness and more.

An Indian holy script explains yoga as - “the journey of the self, through the self, to the self”.