Abdikadirov Azim, a Grade 11 student at the Aga Khan School (AKS), Osh, raised funds to set up a waste management system at the school. 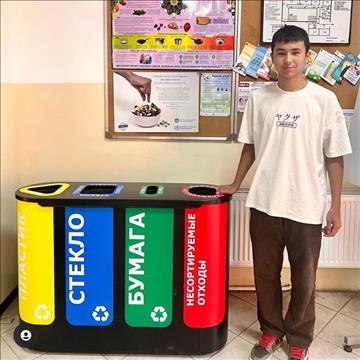 Abdikadirov’s interest in recycling began this year after he attended a three-day workshop organised by the C5+1 Youth Council, an organisation consisting of youth from Central Asia and Afghanistan who strive to enact positive change in their communities. The workshop Abdikadirov attended, titled “Water Crisis & Climate Change”, inspired him to take action in his community and school.
“I conducted some research on the threat of plastic to the environment and learned more about recycling plastic and environmental conservation,” Abdikadirov said.
Using the knowledge he gained, Abdikadirov organised a waste clean-up initiative at a reservoir located in the Batken Region of the Kyrgyz Republic. He and a group of people collected 50 kilograms of plastic and two bags filled with glass bottles. However, Abdikadirov knew more could be done, especially at his school.
“This project inspired me for my next project,” Abdikadirov said.
Abdikadirov decided to create a waste management system at AKS, Osh to encourage the school community to properly sort waste and contribute to preserving the environment. To do this, Abdikadirov aimed to raise USD 400 to buy specialised bins in which the waste would be collected. His initiative was well received by the school community, which rallied behind him and helped him raise USD 200 within two months. The remaining funds were donated by Abdikadirov’s parents, who supported him and his passion for conserving the environment.
Near the end of spring, AKS, Osh began using the specialised bins and haven’t stopped since.
“All the students and staff have been throwing their waste in the appropriate bins,” Abdikadirov said. “Once they’re full, we take it over to the specially arranged waste collection points.”
Abdikadirov’s project was recognised as the best at the school, with him also being nominated as the “Aga Khan School, Osh Student of the Year”. But for Abdikadirov, this is just the beginning.
“My next step is to raise USD 16,000 to purchase 40 custom trash cans that will be installed across all schools in the city,” Abdikadirov said. “This will not only improve the recycling of waste but also preserve our environment.”
Photos (top to bottom):