Ambitious for education: The importance of Village Education Committee 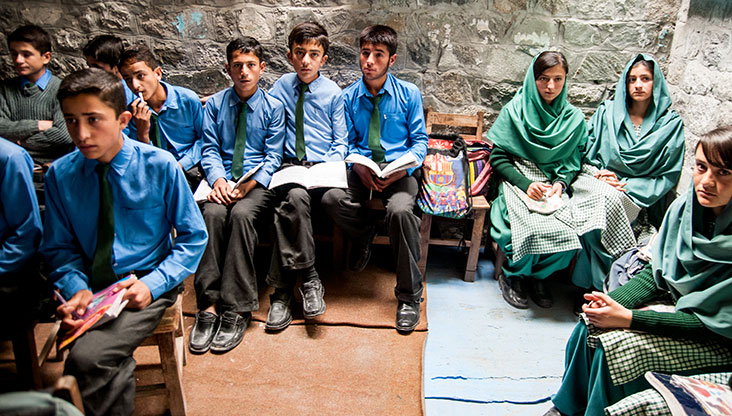 Hadi Husain is an army retiree, and served on the Village Education Committee (VEC) for the Diamond Jubilee (DJ) Learning Resource High School (LRHS), Chatorkhand (Gilgit-Baltistan) from 2004 to 2008.

Hadi Husain is an army retiree, and served on the Village Education Committee (VEC) for the Diamond Jubilee (DJ) Learning Resource High School (LRHS), Chatorkhand (Gilgit-Baltistan) from 2004 to 2008.
Sitting with two former teachers in a brightly-lit pre-primary classroom of DJ LRS Chatorkhand, Husain recalls how he became involved in providing education in spite of not finishing school himself.
“I was never a very good student,” Husain says, chuckling. “After seventh grade, I decided I can’t take any more— so I left school and joined the army.”
Recalling his school days, Husain says, “Teachers and schools in our childhood were very different. Two teachers used to teach the entire school. Our classrooms were under the open skies. If we were lucky, we wrote on wooden slates; otherwise we would write in the mud. Most of our teachers’ time was spent trying to maintain discipline.”
When Husain entered the army, he faced a rude awakening. “I realised just how uneducated I was. When I was constantly passed over for promotions, the drawbacks of not having studied further hit me. They made me committed to improving the provision of education in my village.”
After his retirement from the army, Husain returned to his village and became the VEC convener for the then DJ Middle School, Chatorkhand. Determined that the middle school should be upgraded to a high school, he started fundraising. As the result of a collective effort, the required amount was raised, and a matching grant was received from AKES,P under a programme run by the European Commission. The school was further enhanced in 2011 and was converted into a Learning Resource School under the Australian government-supported Education Development and Improvement Programme. The school not only provided quality education to its own students, but supported surrounding schools and students as well.
Today, a dedicated staff teaches almost 500 students. Solar panels power the computer lab. The beautiful buildings and yard, and the voices of children coming from the open windows of the classrooms, are all a testament to the importance of the community’s involvement in the education of its children. After all, Husain is just one of the community members who have worked hard for the school and the students. “While I was fundraising for the school,” Husain says, “I was thinking of the whole nation. It wasn’t just for my village. You educate one person, you educate a whole circle around them — and I wanted to educate hundreds.”